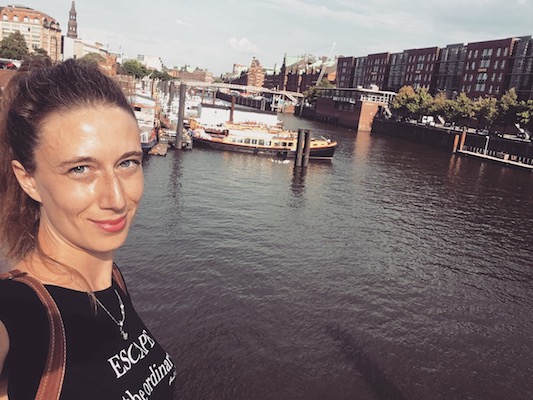 Since Hamburg is one of the main stopover airports but above all one of the busiest ports, many travelers use some of their time to explore Hamburg in a few hours in between their journey.

In my case, Bremerhaven was the last port of call of a Faroe Islands cruise from Reykjavik. So from Bremerhaven I took a train to see Hamburg in a few hours before taking my flight back to Rome.

Obviously since I could only visit Hamburg in a few hours, I had to make a ruthless selection of the city’s points of interest.

All right, quick overview: I was completely exhausted! I was coming off my last night on board. I had a great time with my awesome cruise buddies watching an amazing sky full of stars from the bow of the ship. We were so excited to finally “see” the darkness after sailing for days where the sun never sets.

Another point I have to make is that I ended up in Hamburg on a very hot day. The unbearable heat took me completely by surprise after spending more than a week in the bitter cold of the North Atlantic Ocean. I never thought that I would miss Iceland’s weather so quickly!

Actually I never thought that I would miss Iceland’s weather at all!

But I sucked it up and started my walk pretending that I wasn’t either hot or sleepy.

If you like walking, then visiting Hamburg in a few hours is totally possible without using any transportation.

So if you are ready (I’m pretty sure that in most cases the heat won’t be your problem in Hamburg) then follow my walking tour.

Let’s start with the most important building of the city: Hamburg City Hall, or Rathaus.

Hamburg is a city-state with its own government. The city hall is the seat of Hamburg’s senate and parliament. 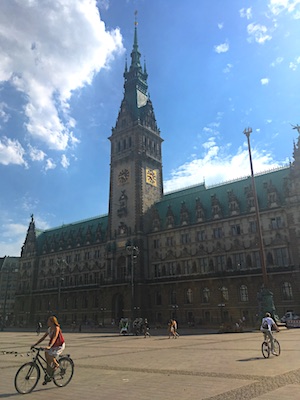 The Rathaus is a beautiful palace built in 1897 in the big square of Rathausmarkt.

You can go on your own into the city hall’s lobby and the beautiful courtyard with the fountain of Hygieia, the Greek goddess of health.

However to visit its 647 rooms (which are more than the rooms of the Buckingham Palace of London) you have to book a guided tour (one hour).

A WALK AROUND BINNENALSTER LAKE.

A few steps from the City Hall we find Binnenalster lake.

Take a nice walk around the lake to get the very good vibe of the area. It’s the typical vibe of a cute European city around lakes and canals. 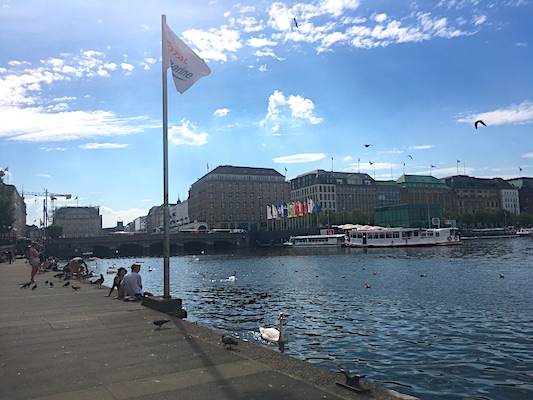 From Lombardsbrücke bridge you can take good photos of the lake with the skyline of Hamburg. 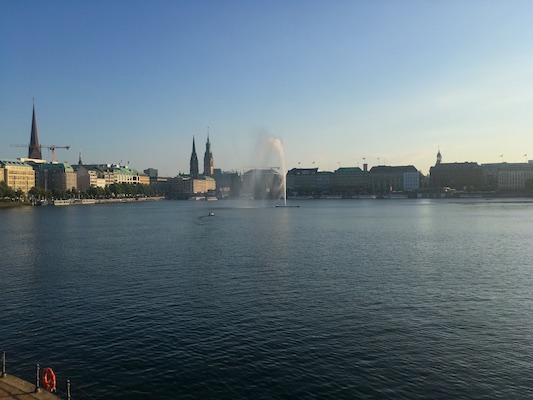 Once you walked around the lake, take Bergstraße and go straight ahead until you reach Elbe river.

WANDERING AROUND THE CANALS OF ELBE RIVER.

Elbe river feeds many watercourses in Hamburg giving the city its peculiar skyline with bridges and canals.

Zippelhaus, Katharinenkirchhof and Bei den Mühren are three adjacent streets along the river that offer a great view of the distinctive skyline of Hamburg: red bricks warehouses overlooking the canals of Elbe river.

The warehouses form a complex called Speicherstadt (listed as a UNESCO World Heritage Site) and most of them are no longer in use.

Cross one of the bridges to reach the other bank of the canal to find Miniatur Wunderland, the museum with the largest model railway system.

Unfortunately I have to skip the visit of Miniatur Wunderland in my quick tour of Hamburg in a few hours and I continue my walk crossing another bridge towards the Elbphilharmonie.

The Elbphilharmonie (Elbe Philharmonic) is a concert hall opened in 2017.

The auditorium fits perfectly well in its port background: it looks like a big cruise ship ready to set sail! 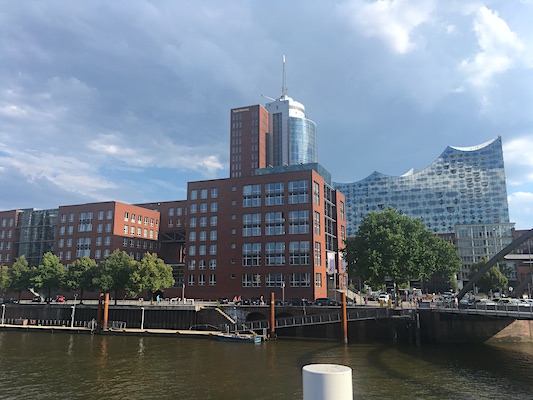 The big glass structure sits on top of the remainings of an old cocoa warehouse building. 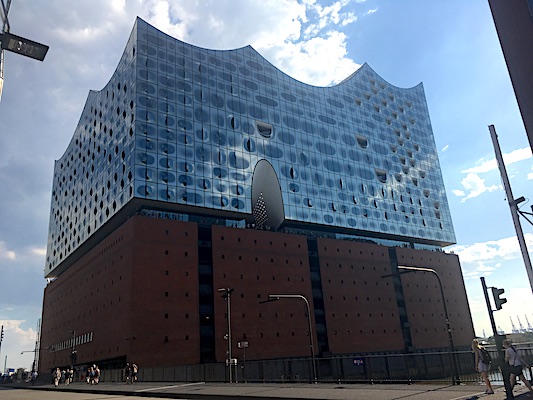 We are now in the area of the great port of Hamburg.

The port of Hamburg is the largest port in Germany and the second busiest port in Europe, after Rotterdam.

Maritime traffic here is impressive: every year Hamburg is the port of call of more than 13000 vessels, including cruise ships, boats for harbor tours, but above all cargo ships. In fact Hamburg is the first port in the world in terms of traffic of container ships.

The port is for Hamburg what the Tour Eiffel is for Paris or the pyramids for Egypt!

If you want to know the real essence of Hamburg gaze at its port for a while. 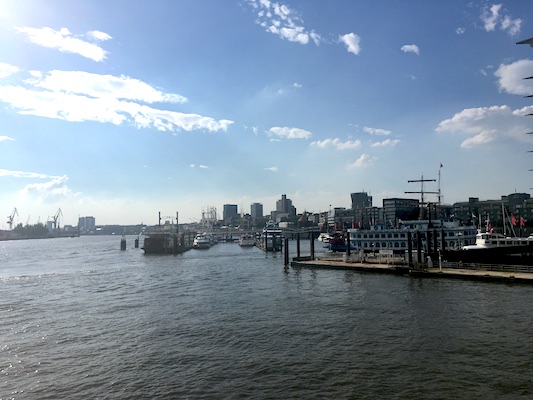 But if you are looking for the sea you won’t find it, no matter how deep your gaze is. In fact Elbe river flows over 100 km before entering the Northern Sea.

Let’s leave now the port behind us, cross a few bridges and walk towards St. Michaelis’ Church.

St. Michaelis’ Church is one of the main landmarks of Hamburg. In fact you can see its bell tower (132 meters tall) throughout the city. 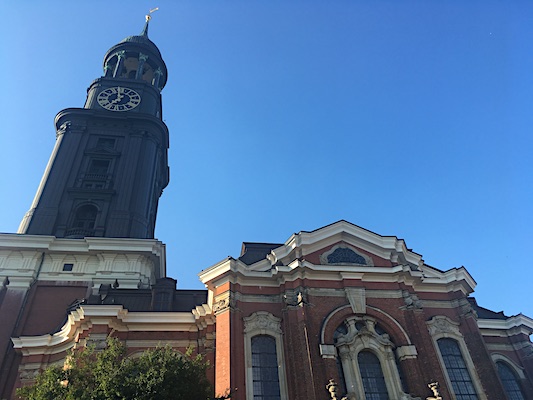 “Der Michel”, as locals call it, is the main Protestant church of the city. It’s dedicated to the Archangel Michael.

The church has been rebuilt a couple of times. It was first destroyed by a fire in 1906 and damaged again by the Second World War bombings.

Der Michel is in a very nice part of the town. So take a little time to wander around the area.

The church is very close to St. Pauli, the Red Light District, where you can walk on Große Freiheit, the street of clubs where the Beatles used to perform.

We are now at the end of our little tour of Hamburg in a few hours.

If you still have some time finish your day with a nice walk (or, why not, a little run) in Planten un Blomen Park.

Or if it’s already dark go back to the area of the City Hall and Binnenalster. Have a good German beer and enjoy the reflection of the city lights in the water of the canals. 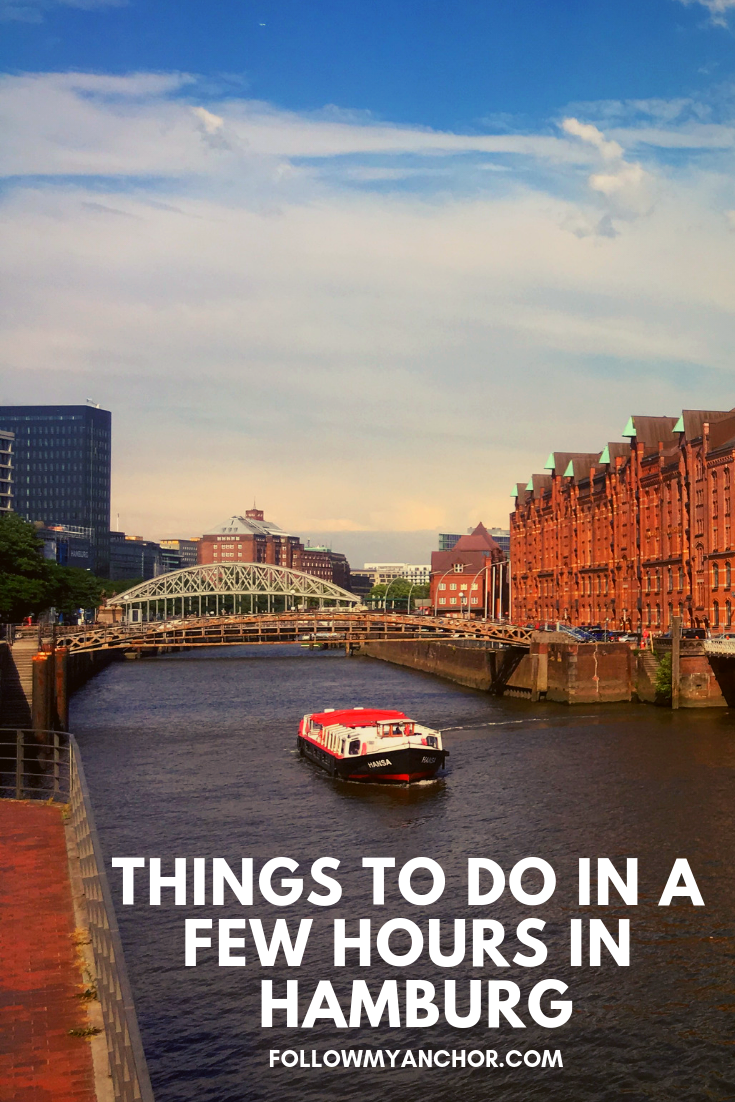 34 Replies to “HAMBURG IN A FEW HOURS”