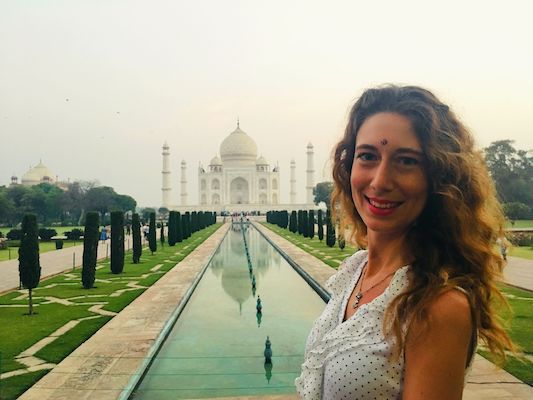 In which city is the Taj Mahal located? Tips to visit the Taj Mahal avoiding the crowd of tourists; story and legends of the symbol of India.

In which city is the Taj Mahal located?

This is probably the first question asked by people who travel to India.

The Taj Mahal is even the reason why most people go to India! When you see this wonder for the first time the feeling is indeed incredible!

But the feeling changes when you are stuck with a huge crowd of tourists! It’s so annoying when you try to find a spot for yourself and your well-deserved photo with the symbol of India.

In this post I will give you some tips to visit the Taj Mahal avoiding the crowd of tourists.

WHERE IS THE TAJ MAHAL LOCATED?

Let’s start by answering the question that brought you here.

Where is the Taj Mahal located?

The Taj Mahal is in the city of Agra, about 200 kilometers from Delhi. Agra, together with Delhi and Jaipur, belongs to the Golden Triangle of India, the three most important cities of India for their artistic, historical and cultural value.

Most people decide to visit the Taj Mahal from Delhi but I don’t recommend it. For two reasons.

First, because Agra is a city that has much more to offer besides the Taj Mahal and it would be a waste to come here just for the marble mausoleum.

Second, because if you want to avoid the crowd you have to go to the Taj Mahal very early in the morning. And that won’t be possible if you take a day trip from Delhi.

So here is a little preview of the most important tip I want to give you: visit the Taj Mahal at sunrise.

TIPS TO VISIT THE TAJ MAHAL AVOIDING THE CROWD OF TOURISTS.

So if you want to avoid the crowd you should visit the Taj Mahal at sunrise.

That’s because most tourists take guided tours from Delhi and arrive late in the morning or early in the afternoon.

Besides guided tours, there will also be independent travelers who arrive from other destinations of their trip through India. Or Indians who come from other cities to see the pride of their country. Or tourists who are already in Agra and too lazy to get up early in the morning!

I suggest you arrive in Agra the night before, stay at a hotel very close to the Taj Mahal, and be very early at the ticket office the next morning.

We stayed at Hotel Taj Resorts which is literally next to the Taj Mahal. And this is a very important aspect to take into consideration!

I also suggest you avoid Saturdays or Sundays because these are the days where the crowd is larger.

The Taj Mahal opens 30 minutes before sunrise so consider being in line already one hour earlier. If you visit the Taj Mahal at sunrise you get two benefits: avoiding the crowd and enjoying a spectacular play of light! Watching the sun rising and the white marble of the mausoleum taking the colors of the sunrise is something that you will remember forever.

So let’s recap my tips:

Obviously this doesn’t mean that it will be you, yourself and the Taj Mahal. There will be other people who had the same idea but the number of tourists will definitely be lower compared to other hours of the day.

When I got in there was just a small number of people. A couple of hours later, after visiting the Taj Mahal, taking some (thousands) pictures and heading back to the entrance, the number of tourists was already four times bigger.

Now that you know the tips to avoid the crowd at the Taj Mahal, let’s get to know the masterpiece of India better!

“A SOLITARY TEAR SUSPENDED ON THE CHEEK OF TIME”.

“A solitary tear suspended on the cheek of time“. This is how the poet Rabindranath Tagore described the Taj Mahal.

The Taj Mahal is in fact the product of a heartbreaking love story.

Emperor Shah Jahan, devastated by the death of his favorite wife Mumtaz Mahal, commissioned the construction of the Taj Mahal in 1632, one year after his lover’s death.

He wanted to give his beloved wife the most beautiful mausoleum ever built on earth. Everything was done under very precise architectural principles, so much that it took more than 20 years to build the mausoleum.

There are also many legends around the Taj Mahal and we don’t know which ones are true.

One says that the emperor cut the hand of the foreman so that we won’t be able to build anything similar anywhere.

Another legend says that the original project wanted also a specular black mausoleum on the opposite bank of the river for the tomb of Shah Jahan.

And some other stories say that the emperor spent the last 7 years of his life locked up for being sick at the Red Fort, where he watched for hours the Taj Mahal from a window without ever being able to reach it.

Today the two lovers rest forever in the Taj Mahal, in a crypt under their cenotaph.

Well the story of the Taj Mahal is very sad and romantic. But I can’t stop thinking of the other wives.

I mean Shah, you are cute and everything (besides the hand cut thing, that was really creepy and unnecessary) but if I was one of the other wives, I would be so mad at you!

ONE OF THE NEW SEVEN WONDERS OF THE WORLD.

Do you know them? They are the Colosseum in Rome, the Machu Picchu in Peru, the statue of Christ the Redeemer in Rio, the Great Wall of China, the city of Petra, the Chichen Itza in Mexico, and the superstar of our post: the Taj Mahal!

Write them down because you always forget one, like the seven dwarves!

But why is the Taj Mahal a wonder?

Besides its obvious beauty, the main reason why the Taj Mahal is a wonder is the perfect geometric system of the whole complex.

In a few words, the Taj Mahal is technically perfect.

The complex includes a monumental 30 meters tall gateway in red sandstone, a large and tidy garden, the mausoleum sitting on a marble plinth, a mosque and a perfect copy of it.

Everything was built according to very precise symmetrical rules.

The mosque for instance. They built an exact copy of it just for symmetry. The copy doesn’t function as a mosque but was probably a guesthouse.

The garden. If you take a good look at it you will notice that everything is perfectly symmetrical.

The four minarets of the plinth. They are 44 meters tall and angled slightly outwards to prevent them from falling over the Taj Mahal in case of an earthquake. Well Shah Jahan really thought of everything!

Too bad that it was him the one who broke the rules of symmetry! The mausoleum was in fact built to house just the tomb of his wife. When Shah’s body was brought in, the symmetry was lost.

Jeez, Shah! You thought of everything but you forgot to book a little space for your tomb!

But that doesn’t surprise us, does it?

So we are at the end of our post. I hope my tips helped you to plan your visit to the Taj Mahal at its best. As I said earlier though, Agra is not just Taj Mahal. There are many other beautiful and interesting things to see! You will find them in the next post! 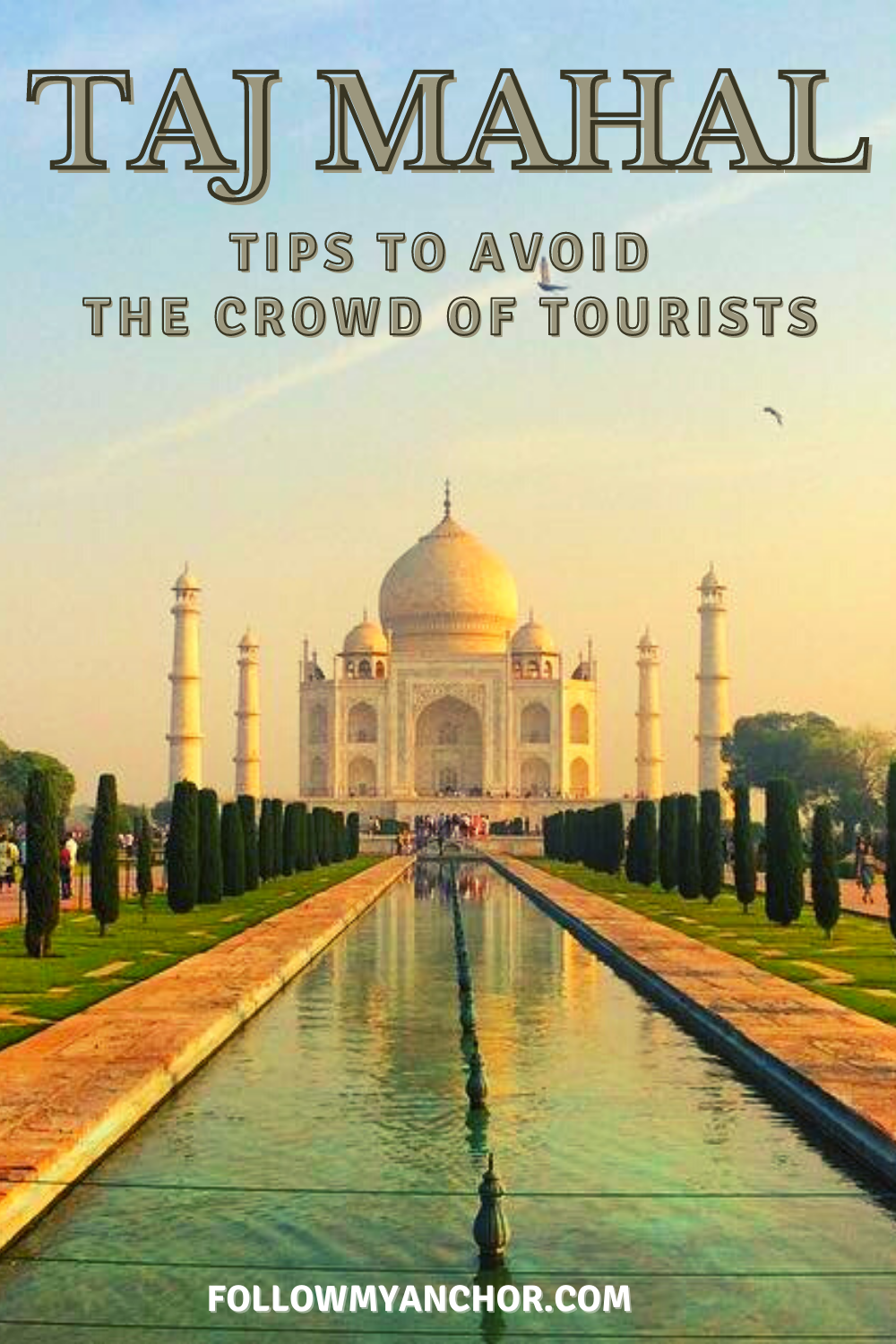