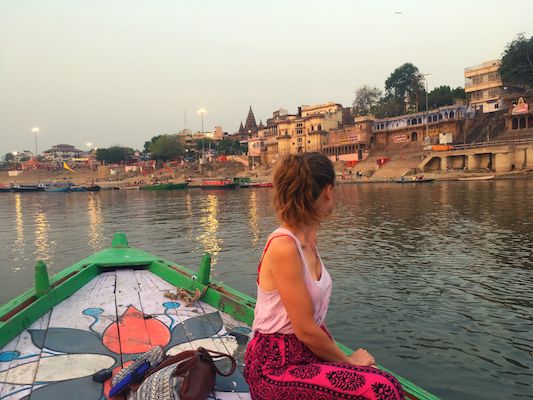 Things to do in Varanasi: travel diary of a journey trough life and death in Varanasi, the holy city of India on the Ganges river.

Varanasi is probably the city that gave me the strongest “cultural shock“.

I’m glad we chose Varanasi as the last stop of our journey through India. It takes some time to adjust to this country and Varanasi is one of the most challenging Indian cities I have visited. But we managed thanks to the “training” we had in the other cities of India.

Besides, choosing Varanasi as our last stop is kind of poetic since it is also the last destination of many Hindu people. Their dream in fact is to die in Varanasi.

This is probably the hardest article I’m writing.

First of all because it’s very difficult to describe Varanasi just with words. Not even the best writer would be able to explain what experiencing this city really means. It’s not easy to describe the emotions, the smell and the whole experience.

Then I usually write about the best things you can do in specific destinations. But Varanasi is not about some specific things to do. It’s more like a very personal experience. It’s a city you have to live more than to see. And everyone who goes to Varanasi has their own unique perception of this place.

Finally, writing about Varanasi means also writing about some quite sensitive issues, like death and cremation. And these are issues that could make some people very uncomfortable. I like to make a few jokes when I write my articles but this time I think I have to put my sarcasm away.

Anyway I’ll try. As The Coldplay sing: “Nobody said it was easy”. But I warn you. I will talk about stories that you might find disturbing. So if you don’t feel like reading this article, I won’t take it personally if you click on “next post”.

Let me begin with a little introduction to the city. Varanasi is one of the oldest inhabited cities in the world.

The name comes from Varuna and Assi, two tributaries of the Ganges river that form the borders of the city. Other names of Varanasi are Benares and Kashi, the City of Light.

Varanasi is the holy city of Shiva, the Lord of destruction, and his wife Parvati. Indeed it is the city where everything ends.

Varanasi is the holiest city for Hindus. They must go to Varanasi at least once in their life and bathe in the holy Gange river from 5 different ghats.

Also, many Hindus who are about to die go to Varanasi to wait for their death. But I will talk more about it later.

Besides Hindus, Varanasi is pilgrimage site for Buddhists who go to Sarnath (a few kilometers from Varanasi) where Buddha gave his first sermon.

So every year Varanasi receives more than a million pilgrims in addition to locals and tourists. You can imagine then how much chaos you can find in this city!

I rarely have headaches; actually I only had two strong headaches in my life so far. One after a free Martini party on the ship. The other one in Varanasi.

The hustle here is incredible. I don’t think I have ever seen more people all together in one place that isn’t for a concert or a festival. And the horns of tuk-tuks and scooters is a sound that never goes away. Like, NEVER.

And of course there are the cows that have priority over everything, just like the tram.

VARANASI: DEATH ON THE GANGES RIVER.

As I said earlier, dying in Varanasi is the dream of all Hindus.

The reason is very simple. Varanasi is the only place on earth where you can escape the eternal cycle of Samsara of death and rebirth, and finally achieve Moksha, the liberation.

In order to do so, the body has to be cremated and the ashes released in the Ganges river. The ritual of cremation follows very specific procedures.

The body is washed, wrapped in a cloth and placed on a pyre. They use different types of wood, according to the family’s budget. Sandalwood is the most expensive one and only the wealthiest families can afford it.

The ceremony is public and everyone but women of the family can attend.

Their concept of death is completely different from ours. It’s a frightening idea for most of us and mourning is a private matter, often filled with tears.

But for them death is just a normal aspect of life, just like all others. So it doesn’t make much difference if people see you eating in public or being cremated in public. Besides, nobody cries because tears are bad luck for the deceased.

The priest guides the head of the family, usually the eldest son who has his head shaved and wears a white robe. He lights the fire and the family patiently waits for the body to burn completely.

Cremation is essential to purify the body. Only a few people make an exception. Children, pregnant women, people who died of snakebite and sadhu, ascetics who renounced their worldly life. They won’t be cremated because they are already pure.

If you are wondering what people who died of snakebite have to do with this, it’s because the snake is a deity. So its bite automatically sets you free of all sins.

These people will be then wrapped in a cloth with stones and dropped in the Ganges river bottom.

THE MOST IMPORTANT GHATS OF VARANASI.

The beating heart of Varanasi is surely the Ganges. Along its banks there are many ghats, steps that lead to the river.

In each one of them you will catch different moments of the life of the people of Varanasi that you will remember forever.

Hindus who take a dip in the water at sunrise and pray in the evening. With people who meditate and do yoga. Men and women who wash their clothes. Bodies that burn (in the cremation ghats). Children who play and swim. Cows that… well we all know what cows do.

In any ghat you are you will witness particular moments of life of Varanasi.

But there are some ghats that you can’t miss. Let’s find out which ones.

Assi Ghat is the last ghat of Varanasi. I suggest you come here before sunrise and hop on a boat to sail on the Ganges river at sunrise. It’s a beautiful experience that allows you to watch Hindu rituals in the ghats from a unique panoramic view.

When you come back to Assi you will probably find a group of people meditating or doing yoga.

We bumped into a group laughing as a meditation exercise! Amazing!

The first impression is shocking. You probably won’t stay long. Like us. The burning smell is too strong, smoke gets in your eyes, and the scene is intense. Too intense.

We left after a couple of minutes.

But then some strange energy called us back. And we attended the ceremony as if we were hypnotized.

The hardest part is the beginning. When you have to suddenly face something you have never found acceptable to watch. But once you connect to that reality, your mind goes into a trance and you start thinking deeply.

You can almost look at death in a new light. In a more peaceful way.

Dashashwamedh Ghat is another ghat that you can’t miss. You should go there in the evening when the Ganga Aarti ceremony takes place.

The ghat is very crowded. People attend the ceremony both from the stairs of the ghat and from the boats on the river. The priests light the fire that they offer to “Mother Ganga“. People release flowers and candles onto the river that represent their dreams.

In Varanasi there are hundreds of temples but only a few allow tourists to visit.

The main temples of Varanasi that we can see are Vishwanath Temple and Sankat Mochan Temple. Unfortunately I don’t have any pictures to show you because you must leave all your belongings before entering the temples.

Vishwanath Temple is in one of the narrow alleys of the old city of Varanasi. The line to get in is huge!

But tourists enter from another gate where there’s no line. Before you get in you have to deposit everything, including your passport, and sign in.

Vishwanath Temple is also called the Golden Temple and is dedicated to Shiva. We don’t really understand what goes on in the temple. We just literally go with the flow and let the crowd push us around in a strange route we don’t understand.

Some make offerings, others touch parts of the temple. Don’t ask yourself too many questions. Just let the people carry you away and at some point you will end up at the exit!

Sankat Mochan Temple is near Assi and is a temple dedicated to the monkey-god Hanuman.

And where there’s Hanuman, there are monkeys. So be very careful because they are just as funny as they are thieves!

This temple is away from the main streets of Varanasi and we don’t understand much about its rituals either.

The alleys of the old city of Varanasi are a maze of winding and crowded narrow streets.

Try to find Blue Lassi, a must-do in Varanasi, where you can try the traditional lassi, a yogurt drink of different flavors.

I have to be honest. After spending a few days in Varanasi I couldn’t wait to go home.

India is a country that consumed me completely. And Varanasi was the top of the hardest journey I have had so far. A real concentrate of the most real and harsh side of India. Too far from our way of thinking; everything is too intense. The headache unbearable.

I was overwhelmed by the reality of Varanasi but at the same time it changed me, fascinated me and forced me to think.

I came home a completely different person. A person who appreciates more the little things that we take too much from granted.

I don’t think I would have had the strength to stay in Varanasi even one day longer but it’s a journey I never regret.

So I say goodbye to you Varanasi and thank you. Thank you for changing my life. 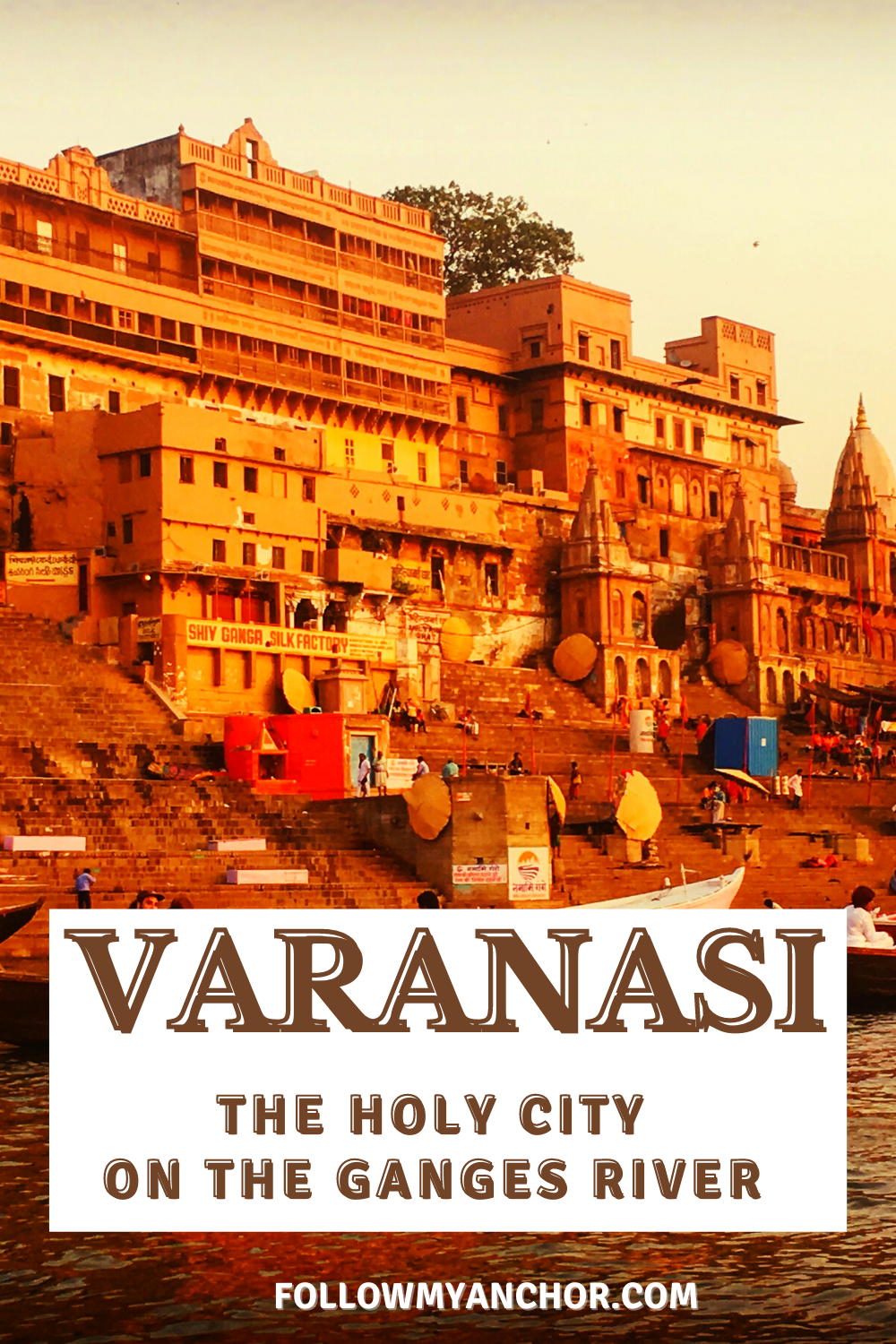