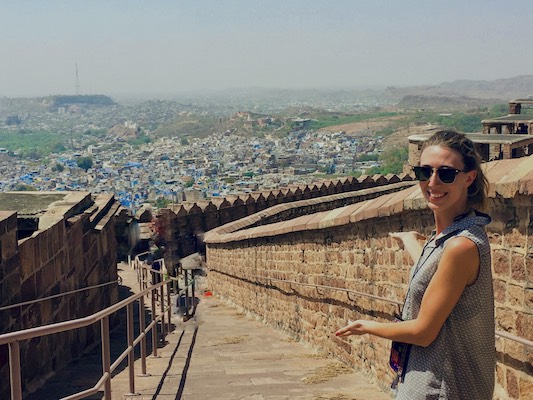 After an exhausting and dusty night trip on a train from Jaisalmer, we are finally getting to our destination: Jodhpur.

The train arrived early in the morning so we have all day to explore the city before heading to Pushkar, the next stop of our journey through the Rajasthan.

We drop our bags at Moustache Jodhpur (ex goStops), get ourselves together and head to the center of Jodhpur.

If Jaisalmer is the golden city of India, Jodhpur is the blue city.

In fact there are many blue houses in Jodhpur that color the skyline of the city. There are two reasons why they are blue. The first reason is to mark clearly the houses of Brahmans, priests belonging to the highest caste. The second one is a little more practical because blue keeps houses cool and drives mosquitos away.

If I knew about this function of the blue before I would have worn something completely different. There were times where I thought it would be possible for a human to melt like ice cream!

Sweating here and sweating there we managed to cover in one day the best things to do in Jodhpur anyway! Let’s find out what they are!

THINGS TO DO IN JODHPUR IN ONE DAY.

It’s a steep climb up to Jai Pol, the main gate to Mehrangarh Fort.

Among all the forts that I have seen in India, Mehrangarh Fort is for sure the one that impressed me the most.

First of all for its grandeur. The fort rises on a 130-meter high hill that kind of melts together with the base of the castle.

And second because besides being an outstanding building, the fort is also a place of many creepy and shocking stories!

Starting with its origin! They say that a hermit lived in the area where the fort stands today. When Maharaja Rao Jodha, the founder of Jodhpur who gave the name to the city, decided to build the fort in 1459, the hermit strongly refused to move.

When he was forced to leave its shelter he cast a terrible curse on the city and the people of Jodhpur.

What did Rao Jodha do then? Did he knock on wood? Fill the house with amulets? Hang horseshoes over the door?

No! He decided to bury a man ALIVE in the foundations of the fort for good luck. Like, seriously dude?

Another incredible story waits for your right behind Loha Pol, the original gate to the fort.

Here there is a wall with some handprints.

Aren’t they cute? I used to do the same as I child, you might think.

Cute my butt! This is a terrible story!

These are the handprints left by the wives of the maharaja just before killing themselves in their husband’s funeral pyre. Unfortunately this was a very common practice in India until not too long ago. It’s called Sati. Sati was considered an act of immense devotion of women to their husband.

Actually many women chose Sati because after their husband died they had no role in society and lost everything, feeling shame and humiliation, so much that death sounded like a better option.

These particular handprints seem to belong to the wives of Maharaja Man Singh, left in 1843 just right before they died.

With shivers down my spine I start to visit this incredible and mysterious place.

The fort hosts the Mehrangarh Museum where you can see the rooms of the castle but also costumes, manuscripts, paintings (especially the beautiful miniatures) and elephants seats!

You can get the audioguides to listen to other incredible stories while visiting the fort.

Another amazing thing in Mehrangarh Fort is the beautiful view of Jodhpur and its blue houses.

We go now to another amazing place of Jodhpur: Jaswant Thada Mausoleum, built in 1899 by Sardar Singh in memory of his father.

And we are still talking about death! I’m sorry!

But this time there is nothing creepy about this place. Although the mausoleum contains the tombs of the maharajas of Jodhpur, its lake and gardens give a very pleasant vibe.

Actually Jaswant Thada is such a beautiful marble building that they call it the Taj Mahal of Marwar, the region of Jodhpur.

Besides the tombs of the kings there is also a small gallery with their portraits.

The Mausoleum is on another panoramic viewpoint of Jodhpur that offers a stunning view of Mehrangarh Fort.

Another important place in Jodhpur is Umaid Bhawan Palace, built between 1929 and 1942 for Umaid Singh, the last maharaja of Jodhpur.

Today part of the palace is the private residence of the former royal family while a wing of the palace belongs to the luxurious hotel Umaid Bhawan Palace.

Another “small” part of the palace hosts the Umaid Bhawan Palace Museum where you can learn the history of the royal family of the 20th century.

With all due respect to the royal family of the 20th century, we decided to skip Umaid Bhawan because we didn’t have enough time to get there.

But we will come back, hopefully as guests of the luxurious hotel!

THE CLOCK TOWER AND SARDAR MARKET.

Now we get down to the city and walk around Sardar Market to see its iconic Clock Tower.

Sardar Market is a busy place where you can find a little bit of everything: spices, fruits, vegetables, clothes, handicrafts, tools, you name it!

WALKING AROUND THE BLUE HOUSES OF JODHPUR.

We can’t leave Jodhpur without walking around its blue houses.

They are literally everywhere so you can just wander around.

But I have a confession to make. We didn’t walk much. We used all tuk-tuks of Jodhpur instead! In my defense, it was so hot that walking would have been my sentence to death!

We say bye to the blue houses and go meet our driver who is waiting for us to take us to Pushkar, the vegan city of India!

There are three things that I will always remember of Jodhpur: the cute blue houses, the fort with its creepy stories and the incredible heat! 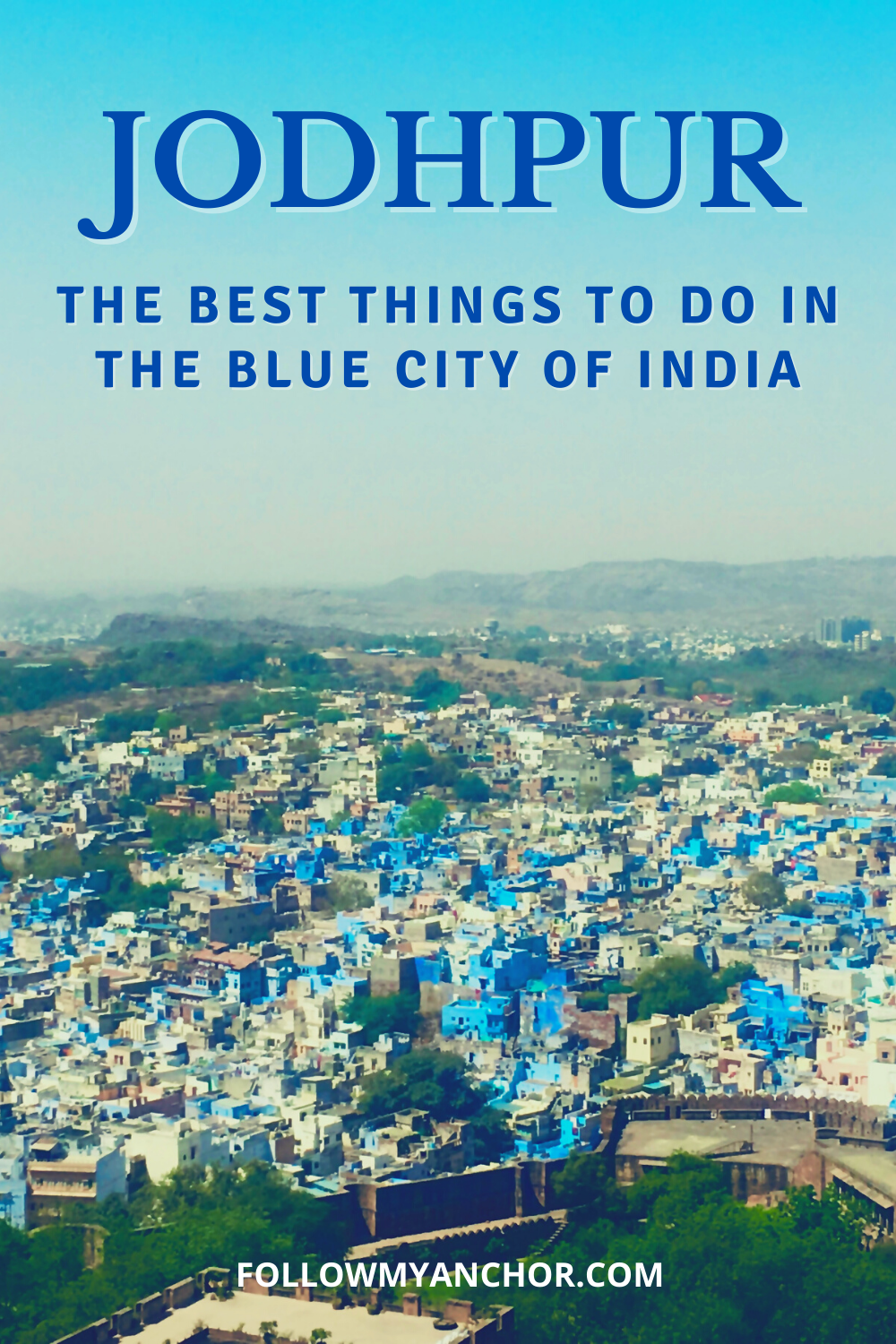