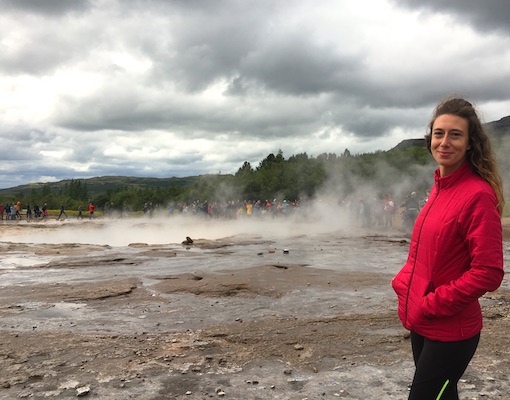 Once in Iceland you can take many day trips from Reykjavik. This is why the capital city is usually the first stop on a journey in this country.

One of the biggest day trips from Reykjavik is certainly the Golden Circle.

The Golden Circle is so named because it’s a circular route from Reykjavik that covers the most extraordinary natural wonders of Iceland. This amazing itinerary runs along volcanic craters, majestic waterfalls, geysers and hot springs.

The classic tour of the Golden Circle includes Gullfoss waterfall, the Geysir Geothermal Field and the stunning Þingvellir National Park.

According to the time available and the tour type, you might add also other stops along the route.

Here you find the description of the itinerary I took in an 8-hour tour. 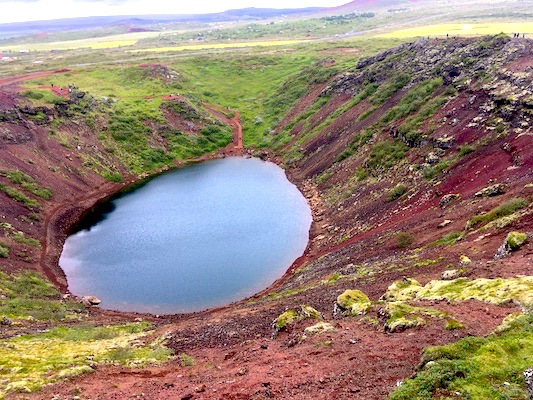 It’s a recently formed crater. It was in fact formed 6500 years ago by an explosion. It sounds like an eternity ago but if you think in terms of geological eras you realize that it’s actually a baby crater!

You can walk along the perimeter of the crater and get down to the lake to take a closer look at it.

Faxi Waterfall is a beautiful waterfall not far from Kerið Crater. 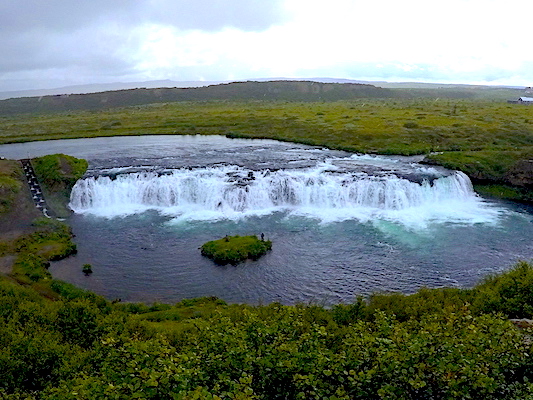 The waterfall is full of salmons and a little ladder on the side helps them for their migration!

Gullfoss Waterfall is the main landmark of Iceland. 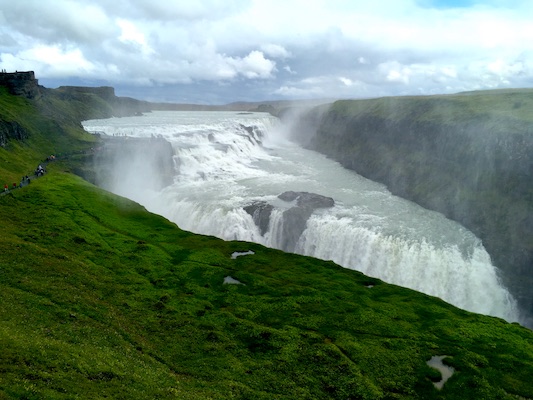 The waterfall is formed by Hvita River (White River) that falls for 32 meters in two steps into a great canyon. 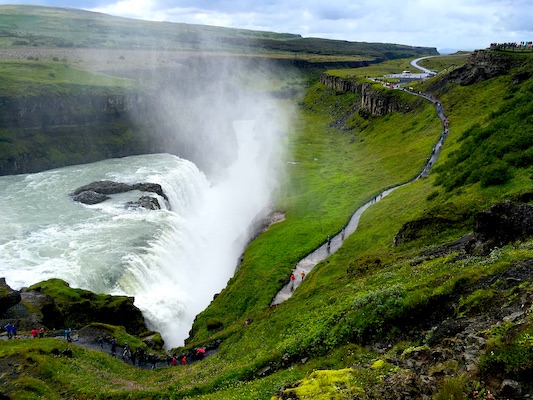 Along the path to the waterfall there is a sign in memory of Sigríður Tómasdottir. 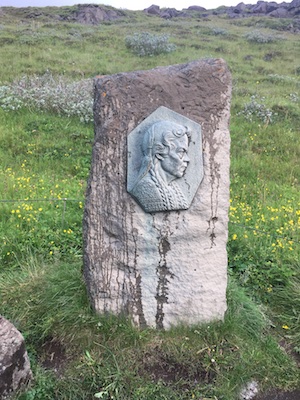 Sigríður lived in Gullfoss with her father Tomas, a farm owner. She used to go to the waterfall every day and she considered it her best friend.

But at some point some foreign investors asked Tomas to sell the waterfall so that they could exploit it for the hydroelectric production. Sigríður fought hard against this project and as a last-ditch effort she said that she would kill herself by jumping into the waterfall. So the project was abandoned and finally Gullfoss Waterfall was designated as a nature reserve in 1979.

The Geysir Geothermal Field is an area of geysers and hot springs.

The name “geyser” comes right from the “Great Geysir” that used to spout water until a few years ago.

Unfortunately today the geyser doesn’t erupt anymore because it’s obstructed by sulphur. But hopefully a small earthquake will make it active again in the future.

A block of stone indicates its location but it actually looks more like a tombstone in memory of the former geyser. 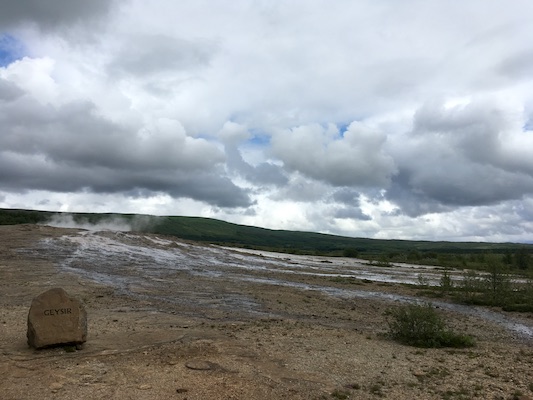 Luckily its brother Strokkur still thrills its visitors with its frequent explosions. In fact it still throws water up to 20 meters into the air every few minutes.

I have to say that the moment when the geyser explodes is absolutely exciting. But I was a little disappointed with the area itself since I expected it to be more in a natural environment. Instead it’s just a few meters from the main road, not too far then from cars, buses and hotels.

The last stop of my itinerary along the Golden Circle is Þingvellir National Park, one of the most extraordinary places in Iceland and UNESCO Heritage Site.

The park is of great historical, geological and natural value.

Historical because it’s the founding site of the oldest Parliament in the world, the Alþingi, where the park gets its name from. The Alþingi was founded in 930 by the descendants of Arnarson, Reykjavik’s founder. It was the site of the greatest events in the country’s history and where the official decisions on the life of the people were taken.

Geological because nowhere else in the world you can see better the fracture between the Eurasian and the American tectonic plate. In fact, here you can walk between the two plates along the Almannagjá gorge that is the result of this great separation process. 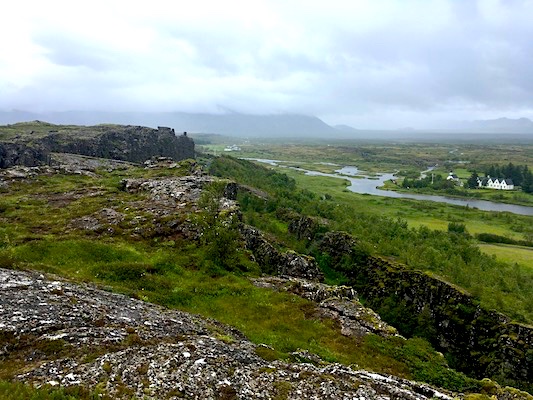 Natural because the area is rich in watercourses, caves, canyons, hot springs, waterfalls and the largest lake of Iceland. 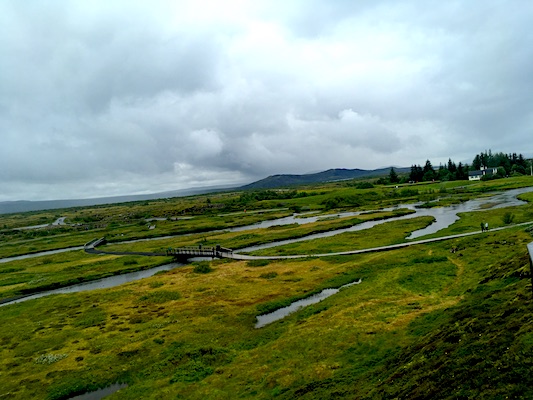 In short, Þingvellir National Park is an amazing place that is worth visiting slowly for days rather than being hastily included in a 300 km itinerary in a day.

But unfortunately time is often against us and you have to try to make the most of it.

So although I have to define the Golden Circle Tour a quick touch and go in wonderful places, the trip has been unique and exciting. Even if Iceland’s weather challenged me and my hair…

One of the best-known day trips from Reykjavik is the Blue Lagoon.

The Blue Lagoon (Bláa Lónið in Icelandic) is a thermal pool formed by the water discharged from the hydroelectric plant in Svartsengi. The blue color comes from the presence of some algae that die when the water gets colder on contact with air.

When you say it like that the Blue Lagoon sounds like a terrifying place but it is actually considered one of the most appealing places in Iceland.

Attracted by what the say to be a must do in Iceland, I find out about the place. The first thing that hits me is the high entrance fee. But I get over it. I have already accepted the fact that Iceland is an expensive destination.

But what really puzzles me is this weird feeling I get the more I read about it. It gives me the idea of being more like a luxury SPA rather than a hot spring in a natural environment.

While I keep running my search I come across another name: the Secret Lagoon.

I really don’t know what to choose so I ask local people.

Well I tell you a secret. Icelanders hate the Blue Lagoon!

At the beginning I had the impression that they didn’t want to say too much. How to talk trash about one of the most popular destinations in their own country? But once they realized that luxury and crowds are not my thing, they finally got it out of their chest! And they absolutely recommended the Secret Lagoon, which is located in a more natural setting with a way smaller crowd of tourists.

So to help you to make your choice, I will summarize here the pros and cons of the Blue Lagoon and the Secret Lagoon.

PRO: It’s cool. It’s one of the most popular destinations in Iceland. When you get back home and you say “hey yo, I’ve been to the Blue Lagoon” you will make everyone jealous.

CON: It’s not blue. Nobody really knows about it (guess what? This is why they call it Secret). When you get back home and you say “I’ve been to the Secret Lagoon” people will have no idea what you are talking about and will probably ask you why you haven’t gone to the Blue Lagoon.

With that said please don’t get me wrong. I’m just joking. I have no doubt about the magical vibe that a place like the Blue Lagoon can give. I’m just giving my personal opinion and saying that I normally look for natural wonders in less touristy destinations.

In my own little way I can say that I loved the Secret Lagoon. And if you really want to look cool, there is a little bar where you can buy a drink to take with you in the lagoon.

And I confess… we did it too! 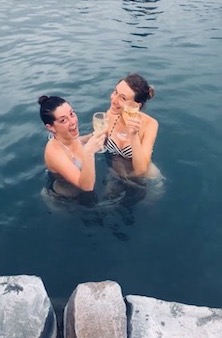 OTHER DAY TRIPS FROM REYKJAVIK.

If you are staying more days, here you find some other ideas for day trips from Reykjavik.

One of the most popular day trips from Reykjavik is a whale watching tour.

Usually the tour companies provide windproof jackets because the weather onboard can get pretty tough.

Keep in mind that sightings are not guaranteed. So you might be sailing for a few hours in the cold without seeing any whale.

Another thing to keep in consideration is that if you are not a sea dog you might get seasick. So as a preventive measure take a sea sickness pill before you get on the boat.

The tours of Iceland’s South coast take about 10 hours and usually include:

If you decide to explore Snæfellsnes peninsula, which is located 150 km north of Reykjavik, you will have the opportunity to take a walk in little fishing villages like Grundarfjörður, Arnarstapi and Hellnar.

In this area there are mountains and volcanic craters, such as Kirkjufell Mountain and Ljósufjöll Volcano.

Other stops that you can’t miss are the black sand beach of Djúpalónssandur and Snæfellsjökull Glacier.

Watching the Northern Lights, or Aurora Borealis, is a unique experience that many travelers dream to have.

The Northern Lights are caused by streams of solar particles electrically charged that release energy with great power when they get in touch with the electrons of the nitrogen atoms in the upper atmosphere.

Sightings are more frequent from October to March, while they are quite rare in summer, when there is the sunlight also in the night hours.

Usually tour companies offer a second tour for free if you couldn’t see the Northern Lights on the first one.

Unfortunately you can’t predict this and just like in all the sightings tours in the world you need to have luck on your side.

I went to Iceland in summer so I didn’t have the chance to see it. But I will definitely go back to witness this unique event that our planet gives us.

WHAT TO DO IN REYKJAVIK IN ONE DAY 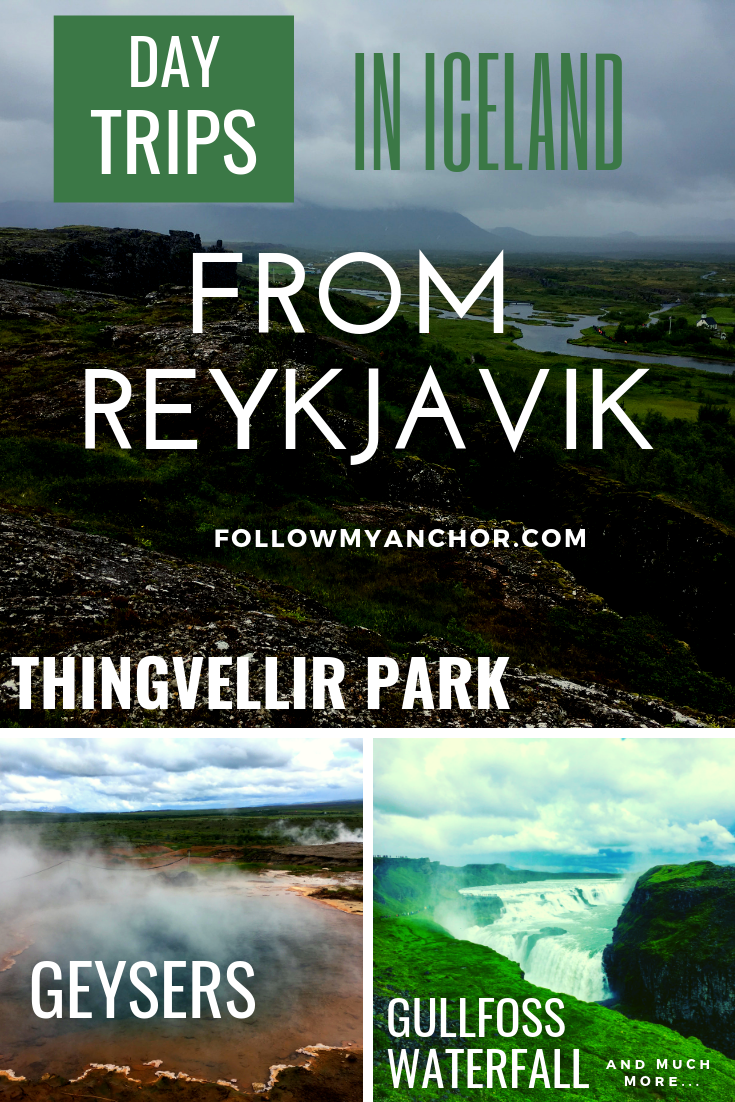 19 Replies to “DAY TRIPS FROM REYKJAVIK”