Things to do in Tallinn: walking tour of the capital city of Estonia, written especially for cruise guests who have a few hours to explore the city.

Visiting Tallinn has always been one of my dreams, together with Saint Petersburg.

Yes I know, probably visiting Tallinn isn’t the most popular dream of all but I remember that when I was a child I saw this gorgeous city in a travel catalogue and I immediately fell in love with it.

And now that I finally got the chance to see it in person I can tell you that I love it even more.

But what does make this city so special and magical? I’ll tell you in this post about the top things that you can do in Tallinn.

Many tourists end up in Tallinn by chance, usually because it’s a popular port of call of the Baltic Sea cruises.

Myself, I chose this cruise especially for Tallinn!

Here is my cruise itinerary:

With just one cruise I got the chance to see two cities of my dreams: Tallinn and Saint Petersburg.

But let me spare my enthusiasm for Saint Petersburg for the next post. Today we talk about Tallinn!

Tallinn is a lovely small city of Estonia with a beautiful medieval old town. There is an upper town, named Toompea, that includes the famous Orthodox Cathedral of Alexander Nevsky and terraces with amazing views over the city, and a lower town, named All-inn, surrounded by medieval walls.

The red tiled roof towers and the city walls form the iconic skyline of Tallinn.

Tallinn is the smallest capital city in Europe and its old town has been UNESCO World Heritage Site since 1997.

Tallinn is a real gem indeed!

Let’s see now in details what you can do in Tallinn.

THINGS TO DO IN TALLINN ON A CRUISE.

If you are visiting Tallinn on a cruise like I did, you probably have just a few hours for the city. But don’t worry! Tallinn is so small that a few hours are just enough.

Surely you can take one of the cruise excursions but it’s very easy to visit Tallinn on your own.

So let’s start with a great itinerary through the highlights of Tallinn!

THINGS TO DO IN TOOMPEA: THE UPPER TOWN.

So you know already that we have two areas in Tallinn: the upper town and the lower town.

Our itinerary starts with the upper town: Toompea.

Toompea Hill is the birthplace of Tallinn. Legend says Toompea is the tomb of King Kalev which was built stone by stone by his wife Linda.

The statue of Linda is in a small park outside the entrance of Toompea.

Toompea Castle is a former fortress on top of Toompea Hill, seat today of the Parliament of Estonia.

Today we can only see a part of the walls and three towers, including the Tall Hermann Tower (46 meters) with the national flag on top.

In front of the Parliament you can see the most popular building of Toompea (and Tallinn itself): the stunning Orthodox Cathedral of Aleksander Nevsky.

Well! I almost cried in front of these cute little domes that I saw many times in my dreams!

Beautiful isn’t it? But we need a short historical introduction in order to understand better the context of this church.

Tsar Alexander III ordered the construction of the cathedral that he named after Aleksander Nevsky, a Russian hero, as a thank you for surviving a train accident in 1888.

The Orthodox Church was built right in front of the Parliament and the Statue of Martin Luther as a tease to show the Lutherans who was in charge.

Well, let’s say that many locals didn’t like the church that much as they saw it as a symbol of the Russian domination. So this church with its cute onion domes has caused quite a few angry hearts among the Estonians who even asked for its demolition in 1924.

What can we say about it today? Well every building has its history after all, and this one surely is one of the main buildings of Tallinn. A building of such historical and cultural value that finally the Estonians decided to make up with it. And they lived happily ever after! Yayyy!

Now, after this nice historical introduction, let’s go inside the church. The entry is free!

We go now to the heart of the upper town of Tallinn and walk around the beautiful streets of Toompea. We’ll end up in front of the Lutheran Cathedral of Toompea, the oldest church in Tallinn.

Keep walking until you get to Patkuli Viewing Platform, right across this arch.

And here you can enjoy a stunning view of the lower town and the Baltic Sea!

Go ahead with tons and tons of pictures! The view here is really amazing!

We now get down to the lower town. We can do it in two ways: through the Short Leg or through the Long Leg.

Short Leg (Lühike Jalg) and Long Leg (Pikk Jalg) are nothing but the names of the two streets between Toompea and the lower town. One of them is a shortcut. Guess which one?

Short Leg, that’s right! You are a genius!

Short Leg, besides being a shortcut, is also the only pedestrian gate to the lower town. You can get there through the Danish King’s Garden, the place where the Danish camped before conquering Toompea in 1219.

Along the steep path there is a tower that is said to be hunted by ghosts! Uuuuuuhhhh!

Long Leg however is the main gate to the lower town and it was built to allow a direct connection between Toompea and the port.

So you can choose either one of these gates to get to the lower town. But why choosing if you can walk them both?

THINGS TO DO IN ALL-INN, THE LOWER TOWN.

Here we are in the lower town, surrounded by over 2 kilometers of medieval walls.

As you already know, the skyline of Tallinn is unique especially for the red tiled roof towers and the walls (16 meters tall) that protected the city.

There used to be 46 towers but today we can only see about 20 towers. Although we lost a few towers over time the medieval walls of Tallinn are among the best preserved walls in Europe.

My advise to you is to see in particular the section between Kuldjala, Sauna and Nunna Towers. Besides being the best part of the walls, this section is also home to a museum that includes a short walk along the wall for great views of the towers.

We start our visit of the old town with one of the cutest squares in northern Europe: Raekoja Plats, the Town Hall Square, market place since the 11th century.

The tall tower of the town hall and the flag of its Old Thomas overlook the square.

Raekoja Plats is home to many events throughout the year. Festivals and concerts in summer, Christmas markets and tree in December.

Find Raeapteek Pharmacy, the oldest pharmacy in the world, dating back to 1422. They used to sell a little bit of everything here, spices, wine, stones, sweets (especially marzipan) and oh yeah! Also medicines!

Very close to the square you can find Saint Nicholas Church. The main reason tourists visit the church is the medieval masterpiece “The Dance of Death” by Berndt Nokte.

Let’s wander around the old town and walk on Pikk Street, one of the main streets of Tallinn, full of things to do and see.

One of the first building you see is the Gothic Church of the Holy Spirit, one of the oldest buildings in Tallinn, with the most ancient public clock of the city on its side.

But Pikk is famous especially for its merchants buildings and guilds, the ancient mercantile corporations.

Find the Great Guild of the greatest merchants, today home of the Estonian History Museum.

Saint Canute’s Guild, with the statues of Saint Canute and Martin Luther on the facade.

The House of the Brotherhood of Black Heads, the guild of the single merchants, dedicated to Saint Mauritius (the Moorish pictured on the faced) who was killed for his Christian beliefs.

Along Pikk Street we can also see the former KGB building that housed the headquarters of the Soviet power where the enemies of the state were imprisoned and interrogated in a basement. The windows were walled up in order to avoid that people on the street could hear the tortures of the interrogators.

And right down the street we find Saint Olaf Church, the church with its tall tower that we could see from Patkuli platform. Do you remember?

Now we go back, this time along another beautiful street of Tallinn: Vene.

Vene, street once of Russian merchants, is today full of cafes, shops and restaurants.

And talking about restaurants, the most popular one is Olde Hansa, a very very medieval restaurant where waiters serve Estonian food in their traditional clothes. Definitely a must try!

If you still have some energy after lunch, take a little detour to Saint Catherine’s Passage, which is part of the ruins of the old Monastery of Saint Catherine.

Along the passage you can see several tombstones that used to be in the church.

And now put away maps, phones, Google Maps, Waze, GPS and get lost around the beautiful medieval streets of Tallinn. This is for sure the best way to enjoy your day in this little gem of Northern Europe!

Once you are ready, leave the old town through Viru Gate, once part of the defensive walls, today one of the symbols of the city.

WHERE TO STAY IN TALLINN.

If you are visiting Tallinn on a cruise you probably won’t need a place to stay. But if you ever want to come back and spend more than a day in this beautiful town, take a look at these deals below. I am coming back for sure!

STOCKHOLM: THINGS TO DO IN TWO DAYS

ST PETERSBURG: THE ULTIMATE LIST OF THE BEST THINGS TO DO IN TWO DAYS 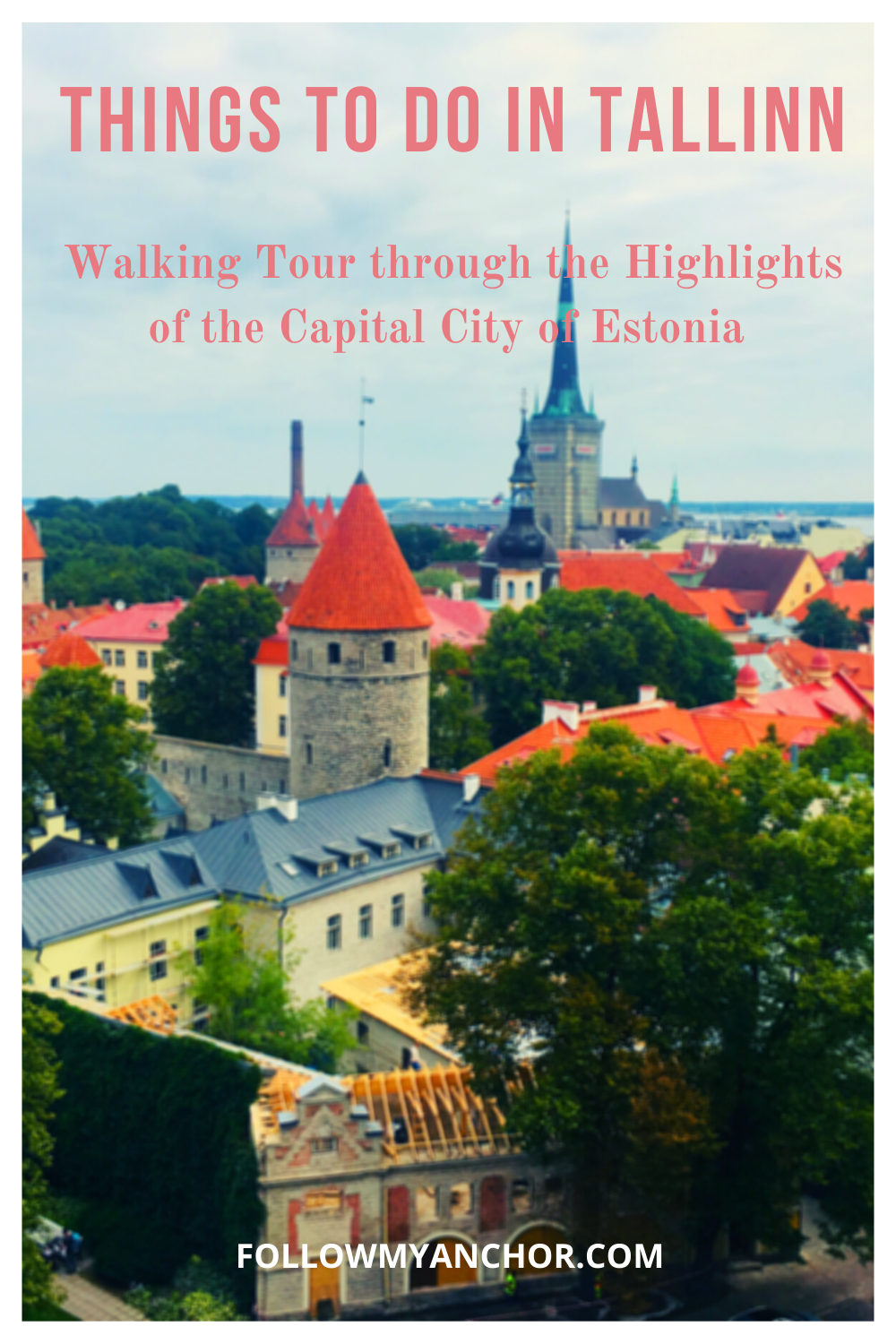 6 Replies to “THINGS TO DO IN TALLINN: WALKING TOUR FOR CRUISE GUESTS”