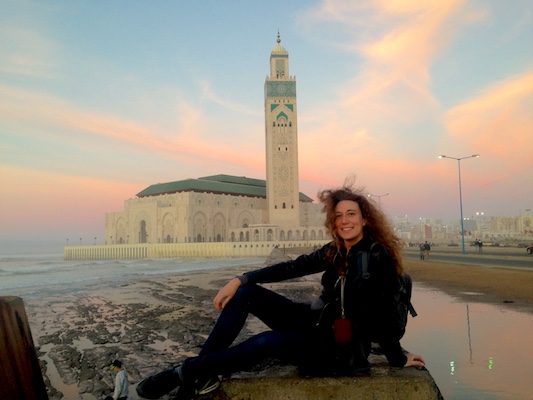 Things to do in Casablanca in one day: a travel itinerary through the highlights of the main city of Morocco.

Casablanca was the first stop of our gypsy adventure that we named “only panties in my bag”. The name comes from the shortlist of things we packed when my friend Erika and I decided to backpack around the two imperial cities of Fès and Rabat from Casablanca.

Despite being the main city of Morocco, Casablanca is probably the least “Moroccan” city of the country.

In fact, in Casablanca, you won’t see those typical chaotic little streets and colorful markets of medinas that make Morocco so unique. Actually, Casablanca’s medina is mostly a residential area.

If Casablanca is the first destination of your trip to Morocco, like it was for us, then you have to travel some more miles before you can feel the real essence of Morocco.

But this doesn’t mean that you have to skip Casablanca. There are actually a few things to do in Casablanca before you move to the next destination in Morocco.

Before we find out things to do in Casablanca in one day, let’s see first how to get to the city from Mohamed V International Airport.

From Mohamed V International Airport take a train that takes you to Casablanca in about 45 minutes.

Erika and I headed straight to Hassan II Mosque and I suggest you do the same.

You can buy the ticket online but I suggest you buy it at the train station because you never know how big the line is to go through immigration at the airport.

From “Casa Port” station start walking towards the mosque and hail a taxi. Don’t take a taxi right in front of the station because they will charge you more. And don’t agree to the first price they tell you. In Morocco, you have to bargain for everything. Especially for a taxi ride!

THINGS TO DO IN CASABLANCA.

Hassan II Mosque alone is worth a trip to Morocco.

This stunning and majestic mosque has an amazing location over the Atlantic Ocean that makes it magnificent especially at sunset.

King Hassan II ordered to build the mosque to celebrate his 60th birthday. Moroccans financed directly its construction that started in 1986 and ended in 1993.

The 210 meters tall mosque’s minaret is the tallest minaret in the world. On top of the minaret, there is a laser beam that points the way to Mecca at night.

Besides being the largest mosque in Morocco, it is also the only mosque that tourists can visit, as access to the other ones is only for Muslims.

Inside the mosque, visitors can see the huge and decorated prayer hall that can fit up to 25.000 people. The dress code is pretty strict: shoulders and knees need to be covered. They will also ask you to take off your shoes before you get in.

A STROLL AROUND CASABLANCA.

Ask a taxi driver to take you from Hassan II Mosque to Parc de la Langue Arab. See the Cathédrale du Sacré Coeur and walk around the city center of Casablanca.

Along the way take a look at the buildings from the colonial days with their Moorish style decorations, a style that blends traditional Moroccan architecture with Art Deco elements from Paris.

Pass by Place Mohamed V and look at the public buildings that surround the square before you go into the little streets that take to Cinéma Rialto. When we were there they were playing just Casablanca!

I will never forget that moment. The first time my taste buds met the amazing Moroccan food.

But above all that was the first time I met them: my beloved gateaux marocains!

This all happened at Restaurant al-Mounia where we had an amazing dinner in a typical Moroccan ambiance that we highly recommend.

One of their specialties is pastilla, a meat pie made with sheets of phyllo pastry filled with pigeon meat, onions, and cinnamon. The dish is very exotic and traveled with us the whole time since we took 3 days to finally digest it!

After this amazing dinner, we say goodbye to Casablanca and head to Casa Voyageurs station to take a train to Fès, the next stop of our exciting backpacking adventure around Morocco!

FES: A SCAVENGER HUNT IN THE MEDINA OF FES

RABAT: THINGS TO DO IN ONE DAY

TANGIER: THE PERFECT ITINERARY FOR ONE DAY

CEUTA: A LITTLE PIECE OF SPAIN IN MOROCCO

CHEFCHAOUEN: THINGS TO DO IN THE BLUE PEARL OF MOROCCO 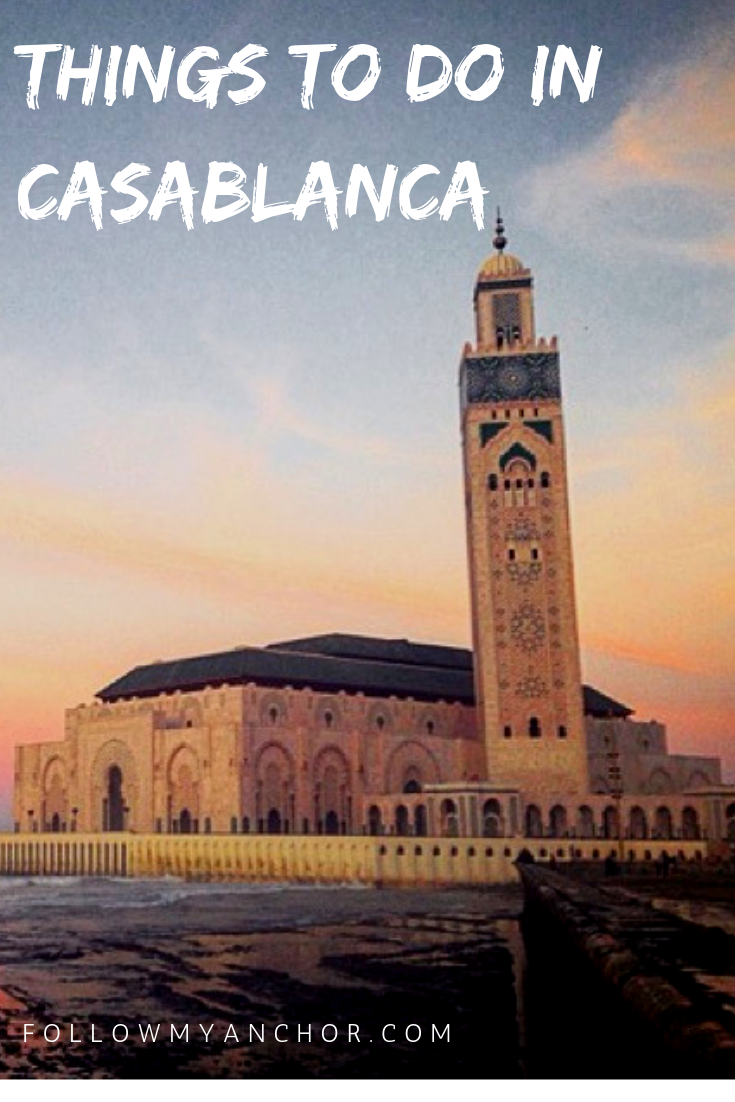 23 Replies to “THINGS TO DO IN CASABLANCA IN ONE DAY”